***Disclaimer-I apologize in advance to any and all LEFT-handed guitarists out there, but all my diagrams and videos are oriented for Right-handed players (players who use their right hands to pick). All of the information is still valid for lefties, but you will have to visualize a “mirror-image” for many of the graphics.

As a beginner, your fretting hand needs to perform the lion’s share of the work. The earlier you work on correct mechanics,the better. Don’t be overwhelmed by trying to remember all of these suggestions at once; concentrate on one or two points at first. After your hands “remember” these mechanics you can move on to others.

Making contact between the string and the fret is the key to producing a clean sound. If we make constant clean contact, the note will sustain as long as the string vibrates. If the pressure is removed, the note will die out. On a properly set up guitar, it shouldn’t take much finger pressure to make the connection. You should experiment to find the least amount of pressure it takes to produce a tone. Exerting too much pressure is fatiguing and could possibly pull the note out of tune on higher profile frets. Here are some helpful hints to perfect your fretting hand:

Here are some easy exercises to help you with your technique:

This first example uses all four fingers of your left hand to cover a 4 fret block. Each finger will cover one specific fret across the guitar. In this case, our index plays the 5th fret, middle plays 6th, ring plays 7th and pinky plays the 8th fret. Imagine yourself drumming your fingers on a desk (from index to pinky).

* Don’t be afraid to experiment with any and all exercises. Why not try playing EX.1 starting from a higher /lower fret while maintaining the same shape?

This exercise uses the Low E (6th) string exclusively, but you should also try it on the other five strings. You will still use one finger per fret like EX.1, but now our “four-finger block” will ascend up the neck- one fret at a time. (*NOTE that whenever you hear terms like “ascending”, “up” or “higher” it means that we are headed towards the body of the guitar). 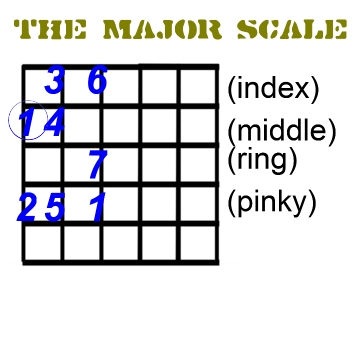 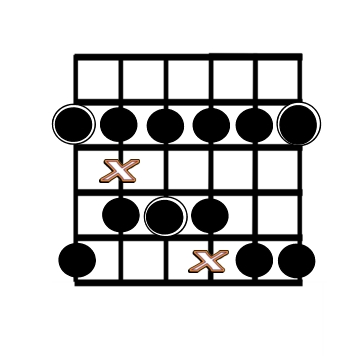