The single most important thing to learn in music is the Musical Alphabet. Don’t move on until you have this memorized. Be able to recite it forwards AND backward without hesitation.

Let’s start simple. How many notes are there in music? Imagine all the songs you have heard in your life and consider all the stylistic and cultural differences. How many notes would it take to create this seemingly limitless body of music? THE ANSWER IS TWELVE.

12? That can’t be right…but it is. You can play any melody or song using a dozen notes.

Think of these 12 notes as increments on a ruler.

If for some bizarre reason you had an unlimited supply of rulers, you could theoretically place them end to end (in either direction) to infinity. The 12 note sequence always remains the same. It just keeps starting over. The only difference is if you are going right (UP) or left (DOWN).

This perpetual 12 note sequence is the basis of understanding music. The only difference is that in music we replace these numbers with letters.

We use the first seven letters of the alphabet (ABCDEFG) to name all 12 notes.

* I know 7 letter names doesn’t seem like enough to name all 12, but bear with me. This is one of those musical concepts that don’t seem to make sense at first.

We can fill in the missing note names by using something known as sharps (#) and flats (b). Sharps and flats can be likened to “generational suffixes” that add “Jr.” or “Sr.” to someone’s name to distinguish them. We’ll add sharps and flats to the existing letters to finish naming the 12 notes.

Sharps (#) raise the pitch of a note- moving it one space to the right.

Flats (b) lower a letter one space- moving it one space to the left.

The space between A and B could be considered one space higher than A (making it an A#) or a B lowered one space (making it a Bb). Both names are considered correct. This is what is referred to as enharmonic equivalents. This means that A# and Bb are the same note expressed differently. Later you will find that one name or the other will be preferable in a given situation.

Notice how we don’t have spaces between B to C and E to F. The reason is we only needed 12 names for our alphabet. If we added a sharp to all 7 letters, we would end up with 14 names. We only need 12, so B and C will always be adjacent to each other. The same thing goes for E to F.

Most people are familiar with the layout of a piano. It’s a great visual aid to see how our musical alphabet lays out. The original 7 notes of the alphabet that we used to name notes are always white keys. Black keys are for sharps/flats.

Here is the complete 12 note sequence on the keyboard (NOTE that B goes right to C and E goes right to F with no black note between them):

Here is what that 12 note sequence repeated on a keyboard looks like:

*Note that every letter has a sharp or flat after it EXCEPT B-C & E-F!!!

To find out how these notes appear on the guitar, check out the “Notes on the Guitar” page.

Notes on the Guitar 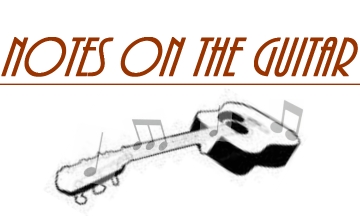 As we learned on the Introduction to notes page, music is comprised of a sequence of 12 notes that repeat as many times as your instrument can manage. Think about a standard piano keyboard with 88 keys. These aren’t all different notes, rather the 12 note sequence has been repeated 7 1/3 times. The guitar isn’t mapped out as visually as the piano (with its symmetric pattern of white and black keys), but we still follow the same sequence of twelve notes.

On a guitar, the more frets you have allow you to play more notes of the sequence. All guitars have at least 12 frets, so we know that they can hold at least one octave worth of music. A standard 22 fret neck goes 10 notes higher in the sequence.

Do you remember the string names from the Using a Digital Tuner page? 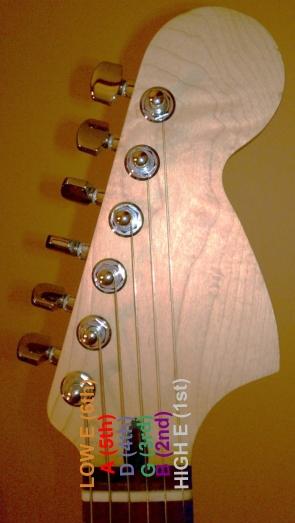 Let’s try to figure out the notes up the Low E (6th) string. We start on that note and count through the next note in the chromatic sequence. You can use this chart as a reference:

Starting here and counting “up” >

*Remember- it doesn’t matter where you start in the sequence. Just keep counting from one note to the next. (When you get to G#/Ab, the sequence starts over again on A).

If we count up (going L to R in the sequence)from the letter E, we get:

Here is how it would look on the guitar:

*You can find the rest of the notes on the Low E string by simply continuing the sequence until you run out of frets. You can fill in this chart using the same method that we used for the Low E string. Simply find the open string letter and count up the sequence from there. You will know you did it right if the 12th fret (the double dot) reads EADGBE again. We know there are only twelve notes in music, so wherever you start on a string, you can count up 12 frets and be on the octave of the same note you started on. (We don’t count the number we start on-that’s why you don’t end up with 13).